This post was originally published in 2018 to coincide with the publication of our Standards. We are reissuing it to coincide with a new initiative of plain language advocates to develop standards through the International Standards Organisation: an initiative that we wholeheartedly support.

In the 1970s and 80s, the information design research and practice community were asking:

What methods and research findings will lead to improvements in information designed for people? 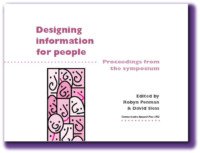 In the 1990s we published some case histories demonstrating CRI’s new effective methods, and asked a new question:

Could information designers use these new methods to bring about improvements, so that all information of a particular type could be designed to a consistent and acceptable high standard?

Since the late 1980s CRI has created and implemented many in-house Standards for its Corporate Members and shared the results of this work widely.

In 1987 CRI developed a Forms Development Procedure and Design Standard for the Australian Bureau of Statistics. It is still in use today.

In 1994 we developed a set of guidelines for the Australian Commonwealth Government to control the usability standard of Consumer Medicine Information (CMI): Writing about Medicines for People, now in its third edition.

In 1998 the EU adopted some of the principles from our Writing about Medicines for People to regulate Patient Information Leaflets (PIL) throughout the EU.

2A Guideline on The Readability of the Label and Package Leaflet of Medicinal Products for Human use, EU, Brussels, 29 September 1998.

In 2004 the Australian Government introduced a new approach to regulating the labelling of over the counter (OTC) medicines based on CRI research and advocacy.

In 2018, with a large body of work behind us, we compiled and published a suite of Standards, making them freely available to the Information Design community.

There are two sets of standards: one set is devoted to gaining people’s attention: what we often refer to as ‘rubbish bin avoidance standards’; the other set is devoted to engaging people so that they can use information appropriately to a high standard.

The standards are based on public and private research showing what is practically achievable using advanced information design methods. With the agreement of consumer, business, and government stakeholders, the standards lay down an acceptable level of performance for public information.

In 2016 the Australian Government introduced new regulations for OTC medicine labelling that totally rejected the evidence-based standards we had helped them develop, despite our many appeals for them not to do so. The consequence, as anticipated, has been a rapid deterioration in the quality of OTC labelling available to consumers.

Based on our recent internal testing results and those of others in the public domain, it is now clear that no labelling developed using the current OTC regulations in Australia meets the standards set in the 2004 industry code of practice. The result is that consumers are disadvantaged and at risk.

Setbacks like this are normal, particularly when economic downturns lead to a loss of knowledgeable staff and practical skills. It will be up to consumer advocates and those of us who care about high standards in information design to join forces to challenge these retrograde developments. Some of us are in it for the long haul.

We therefore welcome the recent initiative of Plain Language advocates to develop a set of standards through the International Standards Organisation (ISO), which will help us collectively reinforce the need for information design of a high standard. We wish them every success.