If you would like a more detailed account of the development and failure of CMI to meet acceptable standards, we have just updated and reissued a full account here.

Based on our research on many types of public documents 1Sless, David. “Designing Public Documents.” Information Design Journal + Document Design Journal 12, no. 1 (2004): 24–35., including CMI, all documents must meet certain standards, otherwise they end up in the paper recycling bin without being read, at some point while you are reading it, or when you have finished reading it.

Such is the competition for your attention and interest that you have probably developed many ways of avoiding information unless you believe it to be of special interest and importance to you. Think of all the letters and junk mail you put in the bin without reading, the television programs you click through, the websites you look at for a few seconds before moving on. If you think a document looks boring or not useful for you, you discard it.

There are two groups of standards. The first group have to be met in order to dissuade you from putting the CMI in the bin before you even read it.

To avoid the bin, information should be:

The second group of standards have to be met to dissuade you from putting it in the bin while reading it.

To sustain your interest, the CMI must enable you to:

If it fails to meet any one of these standards, you might discard the CMI prematurely.

We and others have developed many highly usable CMI that meet all the above standards. Many are small pocket-sized booklets, like the examples below showing pages from a CRI-designed CMI: 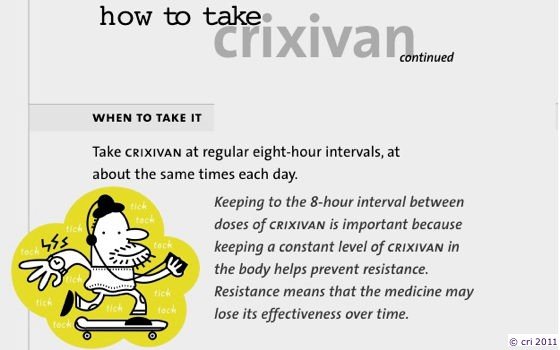 Sadly, the CMI printed by pharmacists at the point of dispensing cannot meet most of the above standards, because of restrictions placed on printing by the Pharmacy Guild (the pharmacists’ industrial body, which controls access to the print technology in use in most pharmacies).

Pharmacy-distributed CMI can only meet two of the standards:

But even then, the usability of these CMI—that is, whether they meet those two standards—is only the case if they are tested using Diagnostic Testing.2Sless, David and Ruth Shrensky. Writing About Medicines for People. Sydney: Australian Self Medication Industry, 2006.

When we developed the first templates for creating CMI in 1994 we did so with the technology the Pharmacy Guild gave us: a pre-digital print engine that had extremely limited capacity to control the appearance of documents, even though by that time more advanced technology was available. Our CMI designs had to work on dot matrix printers and primitive proportionally-spaced text on early version laser printers. The end result is neither attractive nor sufficiently flexible to organise the many types of of information needed on a CMI to make it easily usable. 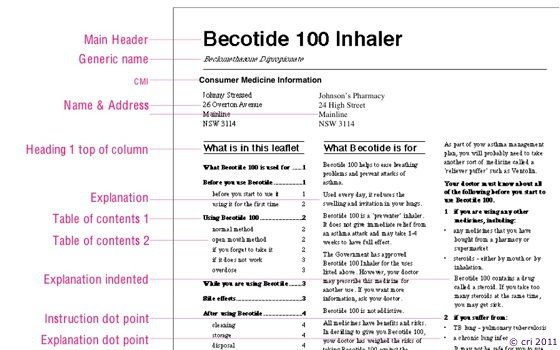 Explaining the structure of a 1994 pharmacy-printed CMI

We assumed, wrongly, that the technology for printing CMI would rapidly become available and with it would come a greater capacity to control the print quality using styles, various fonts, postscript printing engines, and possibly colour. We wanted CMI to meet all the standards of a quality public document. We have been unable to do this, because the printing technology has not been provided. Though we have asked the Pharmacy Guild to provide us with access to the specifications of their print engine on many occasions, they always refuse. As far as we can tell from their instructions to CMI writers, the Pharmacy Guild has not upgraded its print software since 1992. If it has, it has not changed any of the CMI print specifications for CMI writers. Hence the poor quality of CMI today.

From the beginning of pharmacy-delivered CMI, many pharmacists do not give CMI to medicine users, as noted in many research reports.3See our paper on the history of pharmacy CMI

I suspect that one of the reason for this is because pharmacists sense intuitively that the design falls short of their customers’ expectations, but I can give only anecdotal evidence in support of this. It’s ironic that their own Guild might be the cause of poor quality information.

Earlier this year, the body responsible in Australia for regulating medicine information—the Therapeutic Goods Administration (TGA)—received a please-explain-and-do-something-about-pharmacy-CMI from the Minister for the Department of Health. With an election imminent, the Minister was in a hurry—not the best environment in which to do serious template redesign and research—but in July the TGA published the results of a project to redesign CMI templates.4The TGA report 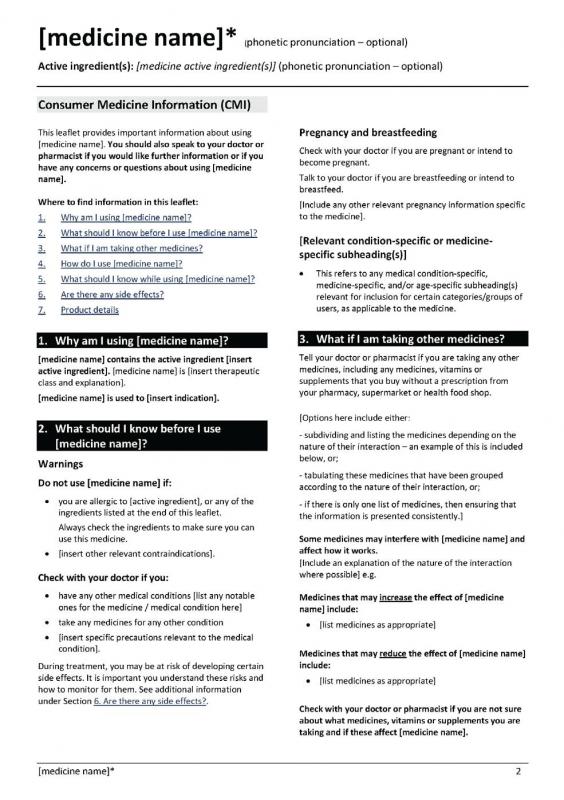 Is this the huge leap forward the Minister was hoping for? The evidence suggests otherwise. The same diagnostic testing used in the 1990s to develop the original templates was used here. After three round of such testing in 2019, with refinements in between the tests, the new template performed at exactly the same level as the 1994 template. The new template is as usable as its predecessor, but no better.

The important backstory to this is clear in the full report showing that as the prototype was developed and tested, refinements such as colour, graphics, and better typography were applied, and participants in the testing expressed a preference for the new. But preference data, especially of the anecdotal kind reported in the study, need to be treated with great caution. There is no clear link between expressed preference and subsequent performance 5See link.

But as the iterations of the prototypes progressed, the old Guild technology seemed to assert itself: one by one the new features were stripped out to be replaced at the end with the bland typographic anonymity of simple text and that old bureaucratic standby—the Ariel font—leaving you, the consumer, with a question: is the above template (1) credible, (2) respectful of you, (3) socially appropriate for you, (4) physically appropriate for you, and (5) attractive?

If you want something better, and I think you deserve it and need it, then you will have to fight for it. We can help, but you need to make the commitment. Help us fight for a better outcome by joining us.