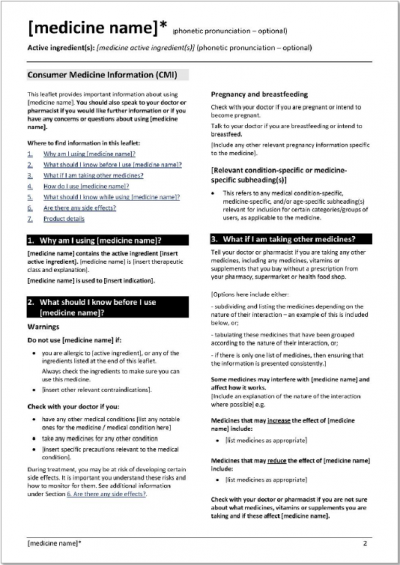 The Australian Consumer Medicine Information (CMI) leaflets for pharmacy-only products have not changed since they were first introduced in 1994. In 2018, with an upcoming election, the Minister of Health insisted on change.1https://www.smh.com.au/politics/federal/greg-hunt-warns-pharmacists-and-doctors-on-medicine-information-20190101-p50p3g.html The new template has just been published .

All CMI are expected to implement the new template before the deadline of 30 December 2025. Unfortunately—and I suspect in a hurry to comply with the Minister’s demand—it is clear that neither the Therapeutic Goods Administration (TGA) who were charged with the task, nor the people who undertook the project  were allowed to give of their best. I do not want to be critical of well-intentioned work. After all—and ignoring the weak preference data—the report shows that the new template performs at the same level as CRI’s 1994 template (people using a CMI can find over 90% of what they look for and successfully use 90% of what they find), which is as it should be. But sadly it fails to meet other standards that would lead to successful CMI of high quality.

Ultimately, though, no CMI template can be successful, as there is a fundamental problem—the sausage machine in the engine of CMI. At the heart of CMI production is an antiquated print engine that wasn’t even fit for purpose in 1994. We had assumed, wrongly as it has turned out, that it would be updated. It never has been. It is still a sausage-making machine: no matter what carefully considered ingredients are added, it produces sausages. Pharmacists don’t like handing out strings of sausages to their customers, and consumers, used to a much more varied diet, as it were, don’t like eating them. 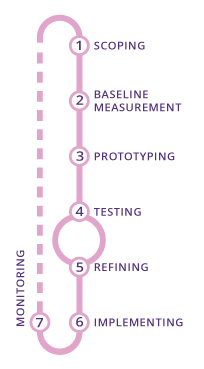 So with modifications to the system for printing out CMI in community pharmacies, the transition to both printed and online CMI should not be difficult. The new CMI template needs some refinements, and CRI would like to help where possible. We know how to apply established best practice public document design methods 2[Sless, D. (2004). Designing public documents. Information Design Journal + Document Design Journal, 12(1), 24-35.. Best quality CMI could be produced well before the December 2025 deadline, and at less cost to industry.

But the sausage machine must go.